Finally, after my first week in Paris, I am getting the chance to sit down and write about what I have been up to. I had never spent more than a few hours here, catching glimpses of the city and it’s people as I passed through on the way to other destinations. As Paris is arguably the most well-known city in Europe, I had a few expectations for the city, and I had built up an idea of what I thought Paris was all about. Though, I have to say Paris took me by surprise. It is a truly impressive and beautiful city.

I arrived by train in the early afternoon, excited to find my way through the maze of the metro system and to Gif-sur-Yvette, the town where I am staying. With my oversized backpack and my new and much more maneuverable suitcase by my side, I headed under the city of Paris and into the bustle of the afternoon rush of the metro. After a bit of trouble, I found the metro line 6 and then changed onto the RER line for the 30-minute ride to Gif. Slightly overheated but happy all the same, I watched as the city transformed into more quaint neighborhoods and the rush of people slowly died down.

I was met at the station by Vian, one of the people who is so generously hosting me. We drove through Gif to his house where I was greeted by his wife, Sylvia, and their dog Ziggy, and cat Zorglub. Over dinner we chatted about some things I should do while in Paris, and let me tell you, there is definitely no shortage of activities.

The next day I headed into Paris with a list of things that I should see, but with no idea how I was actually going to execute it. Luckily for me, I didn’t even have to worry about that. When I was waiting in line to go inside the Notre Dame I started talking to this woman named Agnieszka, who was from Poland and around my age. She was only in Paris for about three days, but like me, it was her first day there. Unlike me, she had a whole list of things to do, perfectly planned out. She invited me to go along with her and so we set off to sightsee around Paris. Going by foot, we covered over 10 miles that day and saw many of the major landmarks. We walked to the Louvre, through the Tuileries Garden, to the Place de la Concorde, to the Eiffel tower, next to the Arc de Triomphe, down the Champs Elysées, and finally to the Galeries Lafayette, passing by the Opera on the way. After a long day of sightseeing and good conversation (I got a lot of travel ideas and added a new destination to the list of places I would like to see- Krakow, Poland!) we parted ways. What better way to explore Paris than with a spontaneous friend! This is the part of my gap year and travel that I was looking forward to the most, but also the one I was most apprehensive about actually happening. And of course, it would not really count as a real day in Paris if I didn’t get lost on the metro- oops!

The next day I went to Versailles. It was very crowded, but the weather was great, and the beauty of the palace and the gardens were breathtaking. I had never seen rooms decorated with such detail and lavishness. Again, it was a day filled with walking and at the end I was ready to sleep. After being misled to think that this very yummy looking granola store was I open, once again, by Google reviews, I finally found I coffee shop, called the Stray Bean, where I had some awesome avocado toast (pictured below) before heading back home.

The next few days I explored Paris, going to the Pantheon, reading, and people watching, and then spending the day in the Musée d’Orsay after buying a very expensive, but delicious latte. Actually, all of the coffee I have had here had been fairly overpriced. Though, I do consider it worth it if you can spend an hour or two sitting in a nice and cozy environment and watching everyone outside go about their vie quotidienne (everyday life, I just love that word in French). Anyways, Paris is wonderful. It is much more busy and diverse than I was used to, coming from Copenhagen and then Lalizolle. People here are so kind and friendly, and I love watching the Parisians eat their cheese and wine sitting on the banks of the Seine. The weather has also been absolutely perfect, a little bit like fall, but not too cold or gloomy. 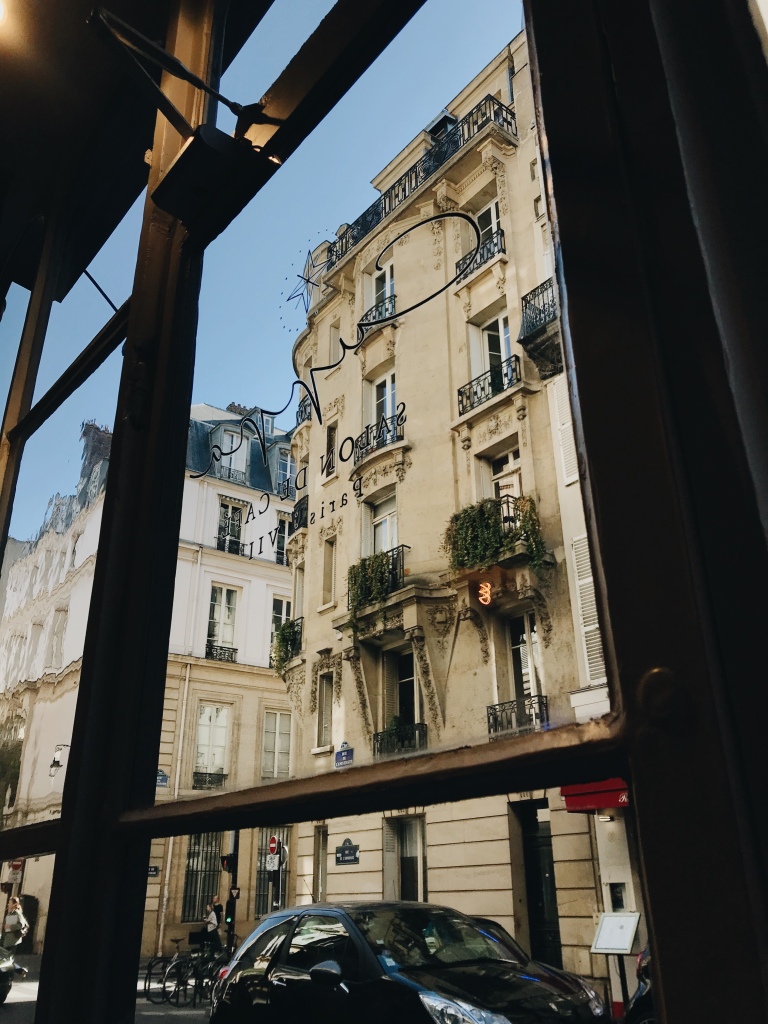 I spent this past weekend hanging out with Sylvia and Vian. On Saturday we decided to go to Paris. After a yummy breakfast of crepes and tea, we went into Paris for the afternoon and evening. Also, side note, I have discovered many wonderful new toppings, like rose hip jam, maple butter, and creamed chestnuts, some of which Sylvia and Vian made themselves. In Paris, we visited the Sacre Coeur and then walked around the surrounding neighborhoods. The church itself was so beautiful. It was built upon a hill so the view is great and the Roman/ Byzantine style of architecture is very nice. Inside, there are a lot of very impressive mosaics. The surrounding area behind the church was very charming and not as busy or noisy as the main parts of Paris. Here we also saw one of the few vineyards still standing today in Paris. After walking around we stopped by a very beautiful cafe before heading off to eat some tasty gratin for dinner. It was so nice to see Paris at night. Still bustling with people, but almost more magical and impressive with all the buildings lit up and the light glistening on the water. In a few days I am going to be spending the night in Paris and so hopefully I will be able to explore more of this side of the city. On Sunday we had a lazy day at home, the weather wasn’t very great, and Sylvia and Vian cooked and made jam. In the afternoon I helped them press apples into juice. I’m very excited to try the juice over dinner tonight. Look out for a blog post about food here coming soon 🙂

That’s all I have for now. Tomorrow I will hopefully head into Paris, although I’m not sure what I’m going to be doing yet. I want to go to the Louvre but it is so big and intimidating so I have been putting it off. Of course, it is Paris so I will find something to do. Thanks for reading!

One thought on “Paris – Week One”